I received an Advance Reader Copy of this book from Albert Whitman & Company for an honest review. 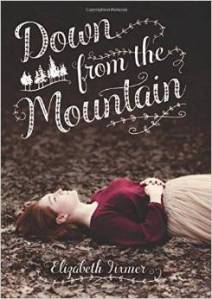 Eva and her mother (her biological mother, not the other mothers on the compound) have lived with Righteous Path for over 10 years. They live simply, striving to always be better in God’s eyes than the heathens of the outside world. Eva, almost 15, is frightened — she will soon become one of Ezekiel’s wives, just like the rest of the women on the compound. She will have to begin her duty as a woman of trying to conceive offspring for Ezekiel, their elderly leader. Mother has been doing this for years, and she has just announced that she is with child. After Eva was born, the doctor said that she would likely die if she gave birth again. Without modern medicine or doctors to help, Eva is worried that this baby could be the end of her mother, the only person who makes her feel safe in this dangerous compound.

When Eva is given the task of creating and selling jewelry in a heathen flea market in Boulder, Colorado, she gets a chance to see the outside world that she used to live in. The nice people she meets can’t really be the devil trying to make her sin, to damn her, can they? She makes a few friends that help her see what she has been kept captive from seeing — that God is not the vengeful being that Ezekiel says, but a benevolent one who brings joy to those who believe. Down from the Mountain is a quiet psychological thriller set in a polygamist cult — it’d be a sin to miss this one.