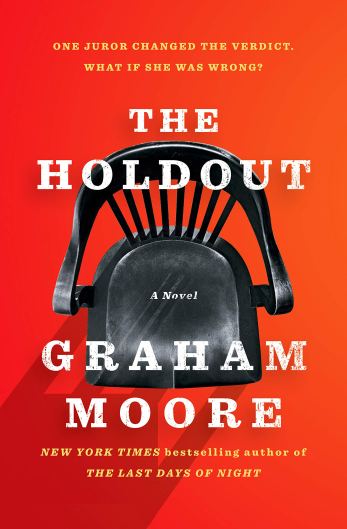 The Holdout was one of the Book of the Month picks for February, and as an avid true crime fan, I knew this was one for me. (Join Book of the Month here and get your first book for $5! It’s one of my favorite book clubs in the world.)

Maya Seale was the titular “holdout,” the only non-guilty voter at the start of months-long deliberations in the case of The People vs. Robert Nock. Bobby Nock had allegedly killed his teenaged student, Jessica Silver, after having an alleged sexual relationship with her. However, the details were not clear, because Jessica’s body was never found. The defense argued that because of this lack of a body, as well as many other unclear details, Bobby Nock should not be found guilty of murder. There was a reasonable doubt. Maya believes this, and argues ad nauseam with her fellow jury members, until they all agree. There was enough reasonable doubt to conclude that Bobby Nock should not be found guilty.

Flash forward 10 years. Having been fascinated by the procedures of the court, Maya Seale is now a highly-sought defense attorney. She’s defended some of the most notorious alleged criminals in Los Angeles. But one day, one of the other jury members, Rick, seeks her out to ask her to come back to the Omni Hotel, where they were sequestered for months, to film a documentary with the help of a popular true crime podcast.

Maya is hesitant, because she knows Rick still harbors major resentment for her due to her “cajoling” the rest of the jury to change their verdicts to not guilty. He thinks Bobby is guilty, and he claims to have new evidence that will prove he is right. After initially declining Rick’s invite, Maya decides that it’d be better to be there, to be involved, than to see the results later and not have any way to share her feelings, regardless of if she was “right” or “wrong” 10 years ago.

This book has TWISTS for days. I read it in under 24 hours, and it’s been quite a while since I’ve been sucked into a story like that! If you like true crime, mystery, whodunits, you’ll like The Holdout. Think Serial meets Twelve Angry Men meets And Then There Were None, and you’ll only have part of this roller coaster of a story.

Links in post are affiliate links whose proceeds go toward the maintenance of this blog.